Valleywag’s Ryan Tate is off the mark in his post Hack to Hacker: Rise of the Journalist-Programmer. That probably doesn’t surprise most of you, but still. The post itself is entertaining enough, including a nice lists of journalists coming from technical backgrounds, but I got stuck on this:

Your typical professional blogger might juggle tasks requiring functional knowledge of HTML, Photoshop, video recording, video editing, video capture, podcasting, and CSS, all to complete tasks that used to be other people’s problems, if they existed at all: production, design, IT, etc.

Coding is the logical next step down this road, albeit one that might only appeal to more ambitious or technically-minded journalists, the sort of people who want to launch their own websites, or attach a truly powerful and interactive feature to an existing one.

While that is true, that some journalists need to know HTML and a bunch of other things to properly function in the online publishing landscape, the leap to coding isn’t the logical next step. Quite the opposite actually, since the CMS’s get better all the time, WYSIWYG is getting ever more competent and the need to actually understand what’s behind your site is shrinking all the time.

In other words, as long as the journos can manage a basic word processor they’ll be fine when it comes to publishing. 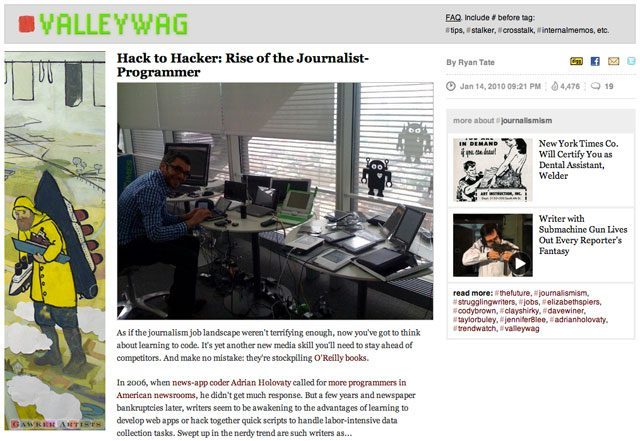 The need for more able coding monkeys to make cool adaptations and reactions to the trends of tomorrow, however, is something completely different. There is no way that’ll be something for the journalists however. To them, content is still king. And traffic, don’t forget the traffic!