Apple has released a new model of the iPod touch, alongside new iPod models. Where the latter are more or less the same as before with new colors, the iPod touch is a different story.

The new iPod touch retains the same form factor as before, adding new colors. That means that it’s still a 4 inch screen, much like th iPhone 5/5s has. This is surprising, since Apple used to keep the iPod touch in line with the current iPhone, but obviously that’s out of the window since they left it untouched for years, up until now.

On the inside, the iPod touch is essentially a slightly underclocked iPhone 6, with the A8 64-bit chip. That’s right, this is a powerful little device, that’s also gained the same great camera as the iPhone 6. The iPod touch has the M8 motion processor, the 8 megapixel camera that also takes slow motion video, and the 1.2 megapixel FaceTime HD camera for calls/selfies. It also got wifi and Bluetooth 4.1, which I think is a first for iOS. The only thing the iPod touch doesn’t have is a TouchID sensor. Storage starts at 16 GB, which nobody should ever consider buying if they intend to install things on the device, and goes up to 128 GB. The iPod touch starts at $199, which isn’t cheap, and a price bump of $50 if I remember correctly. It’s still a great entry level iOS device, but the question is who wants it today. The iPad mini starts at $299 and makes more sense as an entry level device. Maybe the middle ground, an iPad touch with the form factor of an iPhone 6 plus, would be the ideal entry level device? 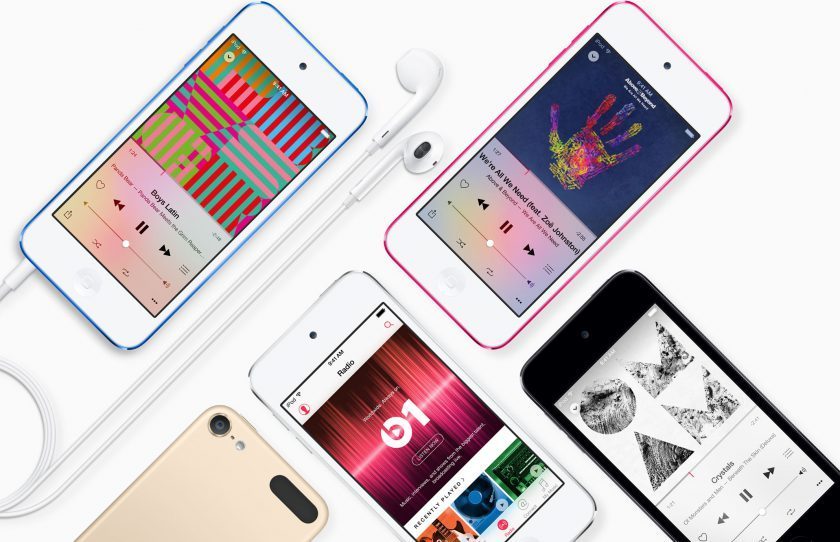 The most advanced iPod yet

But here’s the thing: I don’t think that the iPod touch exists to be an entry level device. I think this is the replacement for the iPod classic, because you can fit a whole lot of media in 128 GB. I also think that Apple wants to keep the iPod alive, and understands that some people doesn’t want to rely on streaming at all times, and thus they offer this. The iPod touch is the top of the line iPod, a true entertainment machine that can do so much more than just play music. With the new powerful innards, this is a (somewhat small) gaming machine, not to mention a nice home device that can stream to any AirPlay enabled product, including the Apple TV. Take that one step further, with HomeKit and Apple’s ambitions for that, and you’ve got a controller for your Internet of Things powered home. And just to top that off, there’s the big unknown that is the Apple TV, and what sort of input method that’ll requre when it launches in its mythical next generation form.

The iPod touch is a smart device, thanks to the App Store. It makes a lot of sense to keep it around for things that aren’t strictly iPhone (or iPad) related. Just as an example, I’ve seen iPod touches being used for queueing systems at a police station here in Sweden. There are clever uses to go around, and sometimes a larger screen isn’t helping.

Which brings us back to the 4 inches of retina screen. There are two reasons for Apple to retain this form factor, and thus the screen size:

I’m betting on #2, and I’m backing it up with the fact that a portable music, nay, media player needs to be just that: portable. Remember when we got the iPhone 5 and thought it would feel big and bulky compared to the iPhone 4? Yeah, it didn’t, despite having a larger screen, because the actual device was designed better; it was smaller. Fast forward to when we thought that the iPhone 6 would feel bulky compared to the iPhone 5? Yeah, no, it didn’t, thanks to the form factor again, despite being actually bigger. Remember when we thought that the iPhone 6 plus was to be too big? Yeah, it is, for all portable reasons, but some of us decide to live with that.

Out of these sizes, from iPhone 4 to 6 plus, the 5 form factor is by far the most portable one. The iPod touch retains that, but is even smaller than the iPhone 5, with the rounded edges of the iPhone 6. It’s the most portable device, which makes it the best choice for a portable media player that utilizes the App Store.

Some will no doubt use the continued existence of the 4 inch screen as an argument for a smaller iPhone. The upcoming iPhone hardware updates are most likely of the s variety, which means that the iPhone 6 and 6 plus will look the same, but have more powerful innards. An additional model could theretically be a 4 inch version of the plastic variety, much like the underappreciated iPhone 5c. And to be honest, I think that’d be great, because I beliece that both the iPhone 6 and 6 plus are too big, which is also why I carry the monsterous 6 plus – if it’s gonna be too big, let’s make it way too big. I’m not sure if I’d consider buying such a small iPhone though, because the size makes me more productive, but I do think it has its place on the market, and in the ecosystem.

I’m glad that the iPod touch is finally up to date again, even if it’s just for a couple of months, until the iPhone jumps ahead. It’s a nice little device, and I might actually get one for the odd little things I use iOS devices for. Having Apple Music connected at all times to my old school stereo is almost a good enough reason, albeit not the most economic one.