Screens are interesting. I’ve got a lot of screens that I interact with. It’s obviously the actual device behind the screen that makes a difference, but I’s still fascinated by screens.

I’ve got a HDTV (several, in fact). I watch and play stuff on it, but other than that it’s not much of an interaction.

There’s the retina MacBook Pro too. This screen is gorgeous, a truly impressive piece of technology right there. Having switched to retina iOS devices a long time ago, I now have a hard time using an operating system on a non-retina screen, or equivalent. I love the retina MacBook Pro screen, and I can’t wait to see it on other devices.

Speaking of iOS devices, I’ve got a bunch of those. The ones I use on a daily basis are the iPhone 5s, the world’s best portable computer that also happens to be a phone, and both the iPad Air and the iPad mini with retina display. These devices aren’t just dumb glass, they’re more than that. Not only is iOS my favorite operating system, but the iOS devices sport the best screens as well. Sure, things look wonderful on the retina MacBook Pro, but the iOS devices win by pure functionality. Sometimes touch is the right thing to do, and touching devices like these truly make them personal computers.

I’ve a Surface Pro 2 from Microsoft. It’s a bulky device with a decent screen, but it never gets personal despite it being touch enabled. This isn’t the screens fault, it’s the operating system. Who’d want to touch Windows? I’ve also got an old (2+ years) Alienware 14x gaming laptop. It still holds up for gaming, but doing anything else on it gives me eyesores. The screen’s not good enough, the resolution’s too low, and if you’ve got a light source nearby, expect to see it in the glass. I don’t like it anymore.

During summer I read a lot on my Kindle Paperwhite. It’s a nice device, with a good screen with backlighting. I wish there was an e-ink tablet with bluetooth using this screen so that I could use it in the sun. Most screens fail outdoors, but not the Kindle Paperwhite. It’s even more pleasant to read on than some paper books since it’s less prone to reflecting the sunlight. Bright paper can be hard on your eyes, but you control that on your Paperwhite so it’s never an issue. 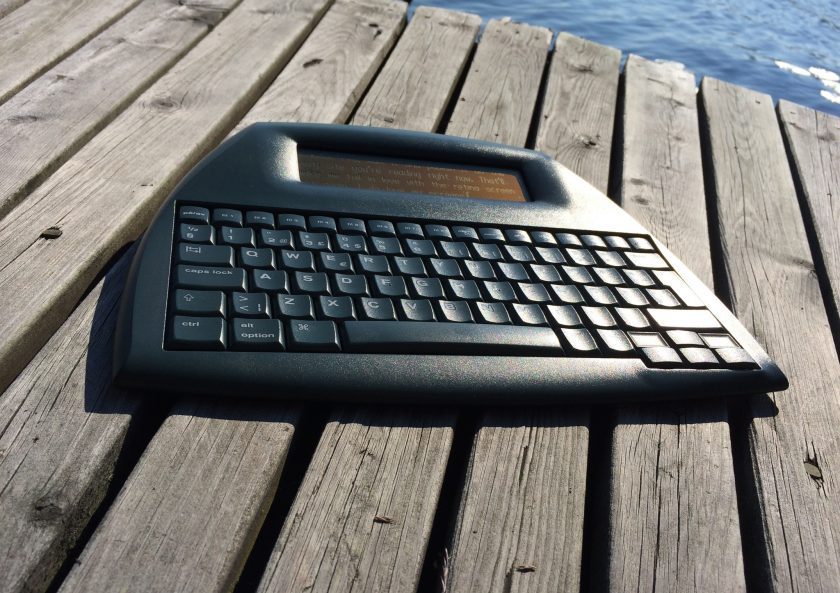 I promise, the text on the Alphasmart NEO’s LCD screen is actually readable

I’ve recently added another screen to the arsenal. Behind it is probably the least capable computer I’ve ever owned, but it doesn’t matter because the screen is great for its purpose. The screen is LCD and for most purposes it shows four lines of text, no graphics, although I can change the system settings to squeeze out six lines. I don’t like that though, it’s too hard to read with the low resolution and the fact that the text has no padding whatsoever, thus almost touching the plastic casing. This little thing is a dumb keyboard computer called NEO, made by Alphasmart back in 2006 or something. I found it at a flea market for next to nothing. It does one thing and one thing well: It lets me write outdoors, because LCD performs fairly well in direct sunlight, and excellent in the shade. Add to that the supposedly 700 hour long battery life of this thing on three AA batteries, and you’ve got an outdoors typewriter right there. In fact, this is fairly close to the e-ink typewriter I’ve been dreaming of.

Right now, sitting on the steps outside my summer home and typing this in scorching sun, the NEO has the best screen. I always say that the iPad is the new typewriter, which is the thesis of my bok The Writer’s iPad, but that doesn’t mean that it’s the right tool for every job. An iPad under these conditions would not only be difficult to use, it’d also risk overheating. Not so much with the NEO, still cool, and so simple in its own right.

That said, in a little while I’ll go inside, transfer this little piece to my retina MacBook Pro, edit it and publish it on the very site you’re reading right now. That’ll make me fall in love with the retina screen yet again. I do love my screens.